Search my site for:

Some would argue that a designer’s big day is not the wedding itself but the day they get to design their own wedding invitation. My wedding was in fact five years ago but I am still very proud of this piece and since letterpress work is so trendy now I have to include it somewhere on my site. Theme colours for the wedding were orange, a teal blue not used in the invite and the cream and burnt sienna colours used in the paper and ink selections. I drew all the motifs; the lovebirds who form a heart-shape in their negative space, the flaxbush, the japanese-esque circular patterns in the background.

These were drawn in illustrator then exposed and light etched onto an itaglio metal plate before paintstakingly being each individually hand printed with an old style press. The sleave was then placed around the two seperate pieces of card, one was the image and the other was the wording of the invitation. My husband and I then set up a production line of two in which we melted the wax and sealed it onto the ribbon then painted gold on and rubbed it off so it added contrast to the letters on the seal. Quite a process but well worth it I thought. 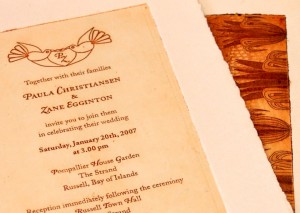 Seach my site for: