Search my site for:

A mixed media artist with a degree majoring in Art History, Paula made her first official foray into the Art scene in 2015 exhibiting her outdoor sculptures title Rock a Bye Birdie in the Kaipara Coast Sculptural Gardens. Her native birds drawn then lazer-cut into plywood before being painted and attached to rocking chairs with bent steel bases aimed to make more visible the presence and plight of the local birds.

Paula continued her outdoor sculptural work by creating a Chrysalis Tree for Parnell White Night 2016. Her work But I Fly saw a tree in main street Parnell covered in glow in the dark chrysalis’s to symbolise the potential of human’s to transform themselves. Nearby were butterfly wings for people to strap on and play at transforming themselves.

In 2017 Paula worked on a series of Ladies of Science and Technology researching, sketching and painting mostly little known woman from past and present who have made significant contributions to either science or technology. At ArtFusions 2017 she presented several watercolours and a series of posters celebrating five of these women as well as re-exhibiting her rocking birds.

Recently Paula Egginton took part in the 100 Day Project creating 100 digital illustrations of Things That Don’t Exist. Every day for one hundred days Paula invented a new creature every day in either Illustrator or Photoshop and took part in the exhibition at Thievery Studios K Rd.

Paula continues to explore how bringing forth, making concrete and exemplifying  the best from our imaginations can act as signposts for humour, hope and meaning. 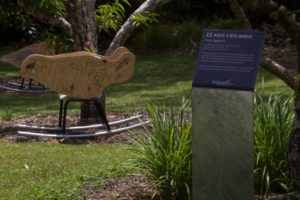 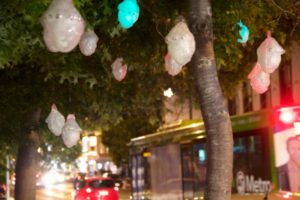 Parnell White Night Artwork But I Fly by Paula Egginton